Confirm HDD errors were due to USB enclosure not supporting large capacity drives?

I suddenly started getting errors when copying files to my external hard drive. There is plenty of free space: 1.64TB free of 3.63TB. I was able to complete the file copy by doing one of two things:

In addition, the Windows 8 error checking tool fails with an error unless a different USB enclosure is used (deleting large files does not help in this case). The CHKDSK command-line tool always works and reports no errors on the disk.

The error when copying a large file: 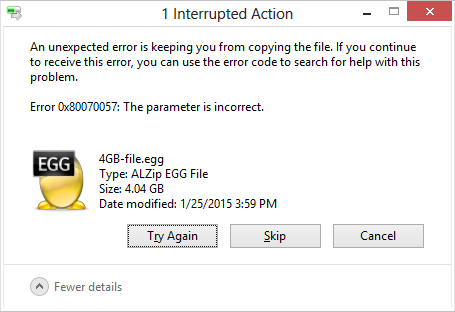 Error mounting the 4TB drive in Ubuntu with the dock that works from Windows:

The drive isn't listed in in fdisk -l, so can't try dd... I tried hooking back up to Windows: no problem; Windows disk properties error checking tool reports no errors.

Tried using dd on the (problem?) enclosure with a different 2TB hard drive:

If it is the USB drive, and it is size-related, then the USB drive is failing to correctly process a sector write (and probably read, too) request. The file size does not matter. The cause is that the larger file has "pieces" falling beyond the addressable boundary.

Due to disk fragmentation, it is difficult to confirm or deny this hypothesis, but you can try with any tool which displays the disk fragmentation map. This should display a large disk with the beginning which is filling up, and nothing past a certain point. Not at the end, especially.

On a FAT32 disk you could try and fill the disk with small files, each 8Kb in size, until the "reachable" area was filled up and the disk became unwriteable. But the disk is NTFS and however the method isn't really very precise, or certain.

If at all possible, I would mount the disk on a Linux live distribution. At that point you could try and read the disk one sector at a time:

will tell you how many 512-byte blocks are there in the external disk. Then

If it is a matter of a limit to NNNNN, you will observe that:

so you can start with a classic bisection algorithm and determine where the critical sector "C" lies (any sector before C is readable, any after is not). If such a sector exists, you've got either an incredibly weird hardware damage, or the proof you were looking for of the enclosure's guilt.

Update - finding the boundary by bisecting: an example

Let's imagine the boundary lies at sector 3,141,592,653 because of some strange bug in the enclosure.

So READABLE and UNREADABLE stalk the unknown boundary more and more closely, from both directions. When they are close enough you can even go and try all the sectors in between.

Once you have the boundary B, to confirm it is a boundary you can do a sequential read of large chunks before B (this will not take too long), maybe one megabyte every gigabyte or so; and then a random sampling of sectors beyond B. For example the first 4*63 sectors beyond the boundary, then one sector every 3905 (or every RAND(4000, 4100) ) to try to avoid hitting always the same magnetic platter.

But actually, if you do find a boundary-like behaviour, and confirm that with another enclosure there is no such boundary -- well, I'd declare the case (en)closed.

OK, I think I figured it out:

There are few ways to test your Hard Drive, Download a software called "HDTune" This is a paid program but has a trial version which last for 30days with full functionality. You can use it to check for bad sectors, check your hard drive health. In any case you had bad sectors, you can try to fix it with HDD Regenerators, Hirens Download Which I Personally use.

Make sure you do not have any hard drives inserted aside from the one you wanna test. it is bootable you can burn it in cd or in usb drive.

next I suggest is check your cables. Specially on external drives, normally those error are caused by lack of power, try inserting it on another computer or changing cables if you have extras then see if it still fails.

It is strange that it generates the error at files above 4GB. Since the FS is NTFS, the limitation is excluded.

I suspect it's a buffer de-sync error.

Try this: go to regedit --> HKEY_LOCAL_MACHINE\SOFTWARE\Policies\Microsoft\System Create a new DWORD value called CopyFileBufferedSynchronousIo. Change it's value from default 0 to 1.

Other things to consider: Do you have very large paths and filenames (like over 255 characters large) ? Do you use additional languages on the OS or other than default regional/keyboard or time/date format setting ? (As weird as it sounds, these can break enough things in windows). Alternately, the controller of the external drive may be unable to address more than 2.0 TB. -edit- Can you post a screenshot of the exact currently used space ?