Failed to open a session for the virtual machine (VirtualBox)

Was not using VirtualBox for some time and now found that it stopped working (as usual).

When running, the following error appears 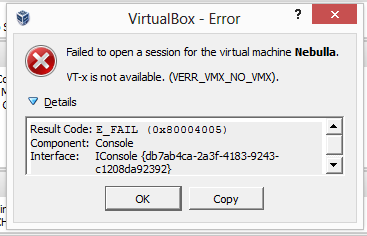 VT-d is enabled in BIOS

Failed to open a session for the virtual machine Nebulla.

VT-x is not available. (VERR_VMX_NO_VMX).

It was a conflict with Hyper-V. When it is installed, then Oracle Virtual Box can't run 64-bit virtual machines.

Even if you have all the virtualization BIOS settings enabled, if you have Hyper-V turned in on Windows Features, VirtualBox will not detect VMX as available.

Use "Turn Windows features on or off", if you are able to remove Hyper-V. If you are unable to live with that, perhaps you can migrate your VMs to Hyper-V.

An efficient way to handle this is described in https://blogs.msdn.microsoft.com/virtual_pc_guy/2008/04/14/creating-a-no-hypervisor-boot-entry/ and it basically creates a boot option for launching your Windows environment without Hyper-V running by using 'bcdedit'.

Once you do that, reboot and you should see a menu at startup that lets you choose to boot with or without Hyper-V enabled. Works on Windows 10.