I URGENTLY need help because I have an assignment due tonight. Thank you in advance!

This is the error that I am receiving:

I realize this question has been asked before here, but I tried running DISM.exe /Online /Cleanup-image /Restorehealth then sfc /scannow, but it didn't help. I also tried uninstalling and reinstalling VirtualBox, but it didn't help. I also disabled Hyper-V through the Control Panel and ran Disable-WindowsOptionalFeature -Online -FeatureName Microsoft-Hyper-V-Hypervisor in the powershell

I URGENTLY need help because I have an assignment due tonight. Thank you in advance!

You most likely have to create a new virtual machine and install Debian on it. One of your snapshots for the Virtual Machine is corrupt. {2e933747-5235-41f1-8ba8-c6368a235243}.vhd is likely 0 KB, if that is the case, there isn't any solution to your problem. You can try to delete the corrupt snapshot from the snapshot chain.

Your issue is best explained by the following:

When a virtual disk is first created for a new virtual machine, it is considered as the base disk for the guest - data for the guest is read from and written to that disk image.

The differencing disk records changes sector-by-sector to the whole disk image, not changes to any file in the disk. VirtualBox does not know what file system is employed on the disk image and therefore can not access any individual file of/on the disk image; only the guest OS is aware of that information.

Keep in mind that access to/from the virtual disks is sector-by-sector, not file-by-file.

When the guest requests that a sector be read, the latest Snapshot is read first. If the sector is not found there (Sector-Not-Found is returned), the next Snapshot in the chain (youngest to oldest) is read, until the base virtual disk is reached. Then the sector on/in the base virtual disk is either read or Sector-Not-Found is returned. 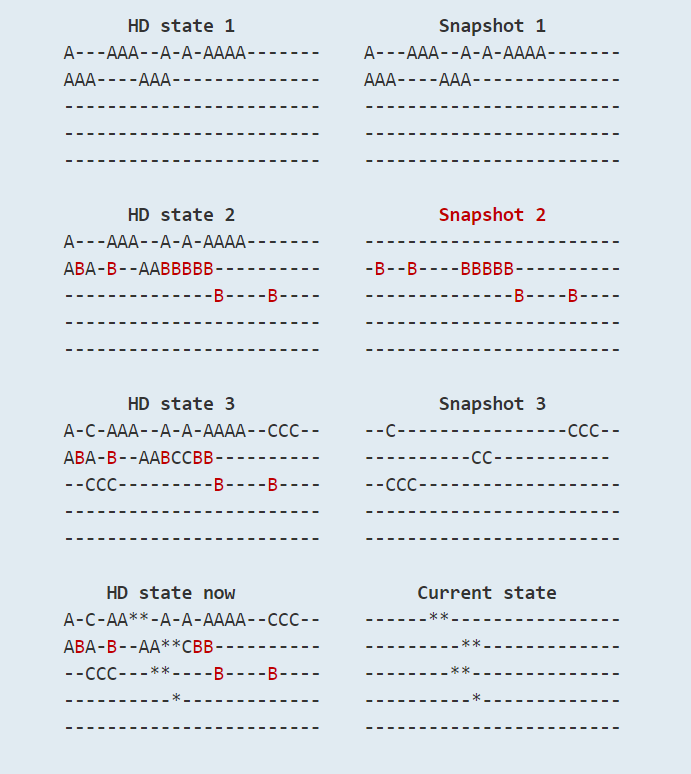 I've marked the changes from "Snapshot 2" (the "B" sectors) differently for a reason. Say that you go outside of VirtualBox and you delete "Snapshot 2". Or the file gets corrupted, truncated or somehow modified. And then you try to recreate your hard drive. With all the "B" sectors missing that would be an impossibility.

People often confuse that a "Snapshot" is and what the "HD state" is. They think that when they're taking a snapshot they take a differential backup of the files and if they delete a snapshot manually they can recover from it. No.