How to change Power options through registry or through command line?

I want to change powercfg.cpl "Power Options" directly through registry.

Specifically I want to change this: 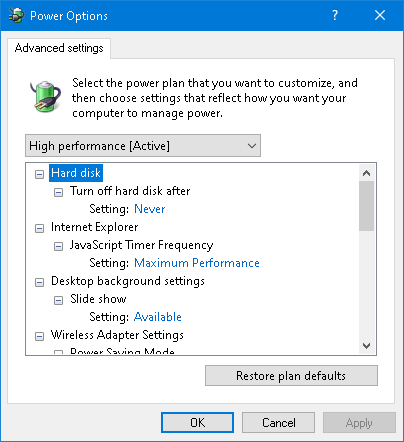 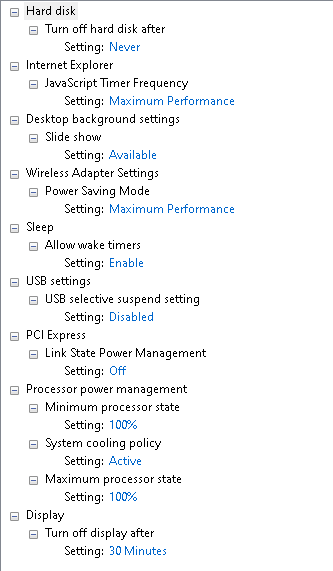 I am using a desktop computer on alternating current power, therefore power saving is unnecessary and it impairs performance; I have disabled fast boot in BIOS.

I have opened this registry key in regedit.exe:

And the only things I can make out inside the key are:

I tried to use powercfg.exe and this is what I got:

I really don't understand any of these...

How can I use a script to automatically change Power Options to the settings posted above, as I don't want to do it manually?

Never mind, I have solved it, again (sort of).

The file is way too long to be posted here, and I have converted it to a ps1 file which is even longer, I have uploaded them to Google Drive:PowerCFG.reg and PowerCFG_reg.ps1

To understand the guids and hexes is just too hard and will cost too much energy, it's not very efficient.

However, since all the settings are stored in this registry key:

Simply exporting and importing it should set the settings to what I want them to be, I don't need to understand each of these keys and values, I just need to tell the computer to import the key.

I have confirmed, simply double clicking or reg import will not properly import the settings, access is denied;

So I imported the key by:

With TrustedInstaller privilege, the command completed successfully without errors.

Trying to run the _reg.ps1 file will generate many errors like this one:

The offenders are REG_BINARY values.