A few weeks ago I began seeing this error every time I try to rename or move a folder in Windows 7 SP1: 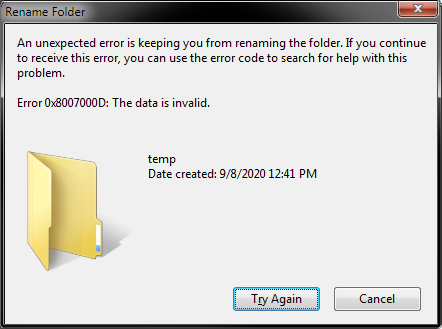 The rename or move always works on the second attempt, when I hit "Try Again".

I can rename or move the same folders from a DOS prompt (cmd.exe) or with another program (e.g. Directory Opus) with no problem. I'm fairly certain it's not an NTFS/index/metadata issue on my drive itself, as Explorer on another computer can rename the folders just fine when it connects to my machine over the network. And all sfc, chkdsk, etc. commands pass with no issues. I do see the error when I try to rename folders on the remote machine using my computer's Explorer.

I don't have any restore points to revert to. My most recent backup that is before this began is from months ago and I'm not keen to revert back to that.

I'm not interested in upgrading this machine to Windows 10. I don't care that Microsoft doesn't support it anymore (that's why I'm asking the question here instead of paying them). I'm also not keen to reinstall my OS from scratch (it takes literally months to set up and customize all the software again).

As a last-ditch effort, I tried a Windows 7 in-place upgrade to repair this installation. Unfortunately that failed with different set of errors (and Microsoft's Upgrade Advisor tool no longer works as they broke the URL the software needs to connect with).

Grateful for any ideas to diagnose the cause of this issue. Scalpels preferred over sledgehammers.

EDIT: There were some presumably unrelated issues reported by sfc /scannow but those have been cleared up and the tool gives a clean result now (they were due to some customizations detailed here which I made to shellstyle.dll right after the OS was first installed). I do have some files in C:\Windows\winsxs\Temp\PendingDeletes and PendingRenames, if that matters.

After days of work on it I finally managed to solve this issue. The discussion here led me to examine this registry key: HKEY_LOCAL_MACHINE\SOFTWARE\Microsoft\Windows\CurrentVersion\Explorer\FolderDescriptions