The installer does not give a message apart from saying that it failed at roughly 23%, opening the setuperr.log, I get this at the end, the first 2 lines seem to point to the problem:

Especially, it seems like the winre.wim image could not be mounted. I don't know what the matching file name in the souce folder is, so I am trying with the 273MB boot.wim.

Error is reported to be with SetFileSize. There is plenty of free space, also, I checked that the path in total is only 128 chars for that file.

I assume this is the very same error I have with the OS upgrade.

What I have already attempted to fix

How can I fix the dism/wim in order to allow mounting images again?

If you manage to completely install Windows 10, there are 2 times where Setup counts up in percent.

The first time it counts up, before the reboot, it copies the necessary setup files, and round about 23%, it mounts an image using dism/wim.

Looking at the setup logfile, I saw problems with image mounting.

In my case, the image mounting mechanism was broken, which I verified by copying Windows_10_pro_de_Upgrade.exctracted.iso\sources\boot.wim from the install source folder to C:\temp and then executing

to attempt to mount the image, which failed with error code 87. (Folder C:\Temp\offline has to be manually created. Please note that once you successfully mounted the image, you should unmount it again manually via

I could then compare the behavior on the faulty machine to a Win 8.1 Pro VM I had, where the mounting worked. Looking at the Logfile, I noticed that I got a problem with file

Using Sysinternal's Process Monitor I could record dism.exe's actions and compare them to the desired ones. I noticed that the failed action (SetFileSize) occured once in the working mounting case, and twice in the failing one. I looked at the stacktrace of the failing action and saw that there was one additional call, in filter driver cbftlsfs4.sys. 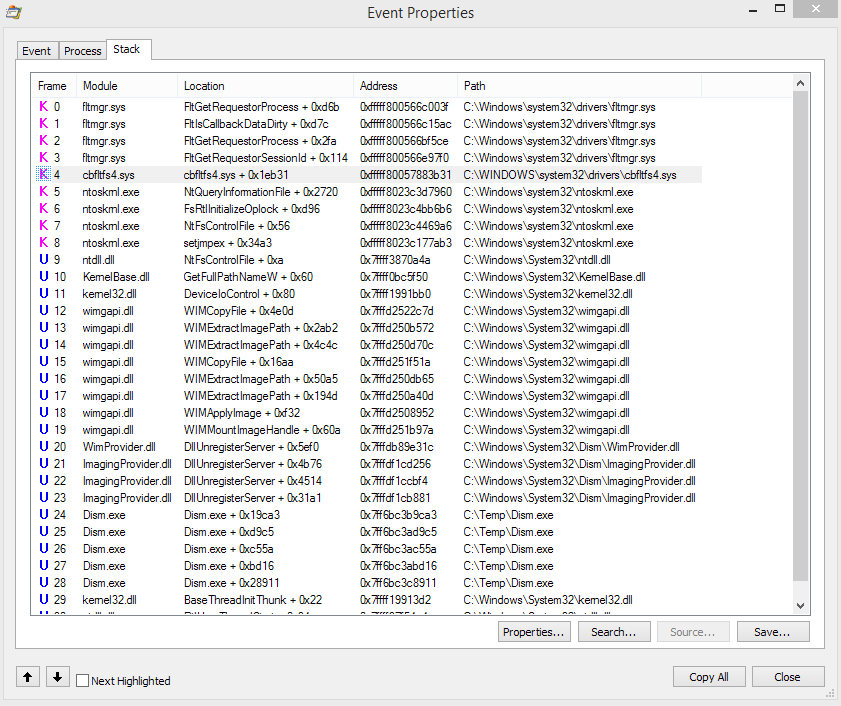 Some googling revealed that this file belongs to Cloudfogger. Uninstalling Cloudfogger (I moved to viivo some time ago after having different issues with Cloudfogger, so uninstalling was no issue) removed both the filter driver as well as the mounting problem.

Probably, few people have this exact same issue. On a different machine, with an older version of Cloudfogger, I did not have this issue. For me, it was 2 days of work and investigation, and perhaps this is helpful to someone else, so I wrote down my steps in so much detail.

The dism.exe command has a potential to fix the issue. Look at this thread:

As part of the disucssion there are 2 .bat files posted - look at what is inside them and run yourself or use them directly.

However other users report it was not fixable and that they had to reload Win 8.1 - look here

They blame Microsoft (not sure about that) but it might be less time consuming to backup data and install Windows 10 as a fresh copy and use your 8.1 license key to activate