While sending messages to Azure Service Bus Topics from existing .Net application, I am getting following exception

The type initializer for 'Azure.Messaging.ServiceBus.Core.ClientLibraryInformation' threw an exception. Could not load file or assembly 'System.Runtime.InteropServices.RuntimeInformation, Version=4.0.0.0, Culture=neutral, PublicKeyToken=b03f5f7f11d50a3a' or one of its dependencies. The located assembly's manifest definition does not match the assembly reference. (Exception from HRESULT: 0x80131040)

The above is working fine in a new .Net Core application. I am unable to find out what is wrong.

In .NET, dependency conflicts occur when two versions of the same assembly are loaded into the same Assembly Load Context. This conflict is a common problem that occurs in any software where versioned dependencies are used. Because there are no simple solutions, and because many dependency-resolution frameworks try to solve the problem in different ways, this situation is often called "dependency hell".

For example, say your .NET application, DuckBuilder, brings in two dependencies, to perform parts of its functionality and looks like this: 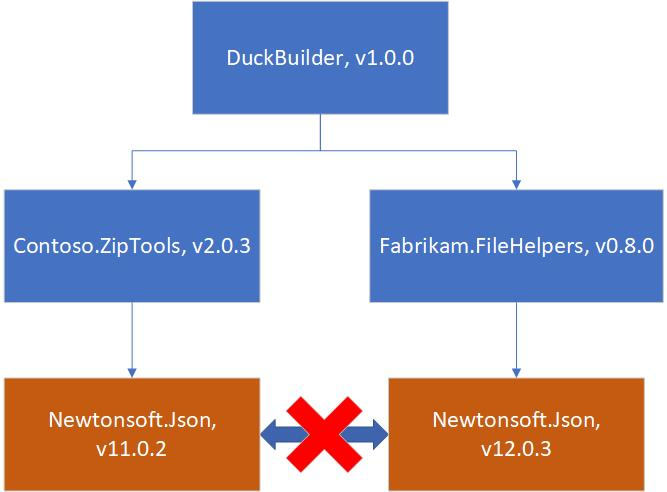 Because Contoso.ZipTools and Fabrikam.FileHelpers both depend on different versions of Newtonsoft.Json, there may be a dependency conflict depending on how each dependency is loaded.

I had to manually update the references. When I did this, the method started working fine.