At our company we use a couple methods of updating database models. we use sqlproj and dacpacs as well as we have a .net core app using DbUp. I have successfully containerized using dacpac based of this article automating-sql-server-2019-docker-deployments

Now I am working on Db Up. There are a few challenges that I've tried to sort out but I am not able to sort through them. 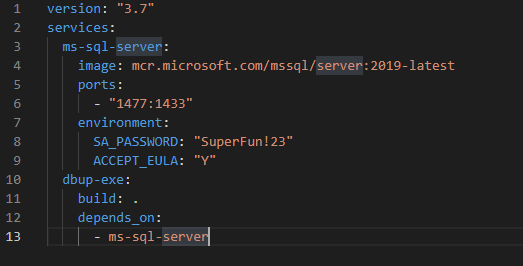 I have two errors

System.Data.SqlClient.SqlException (0x80131904): A network-related or instance-specific error occurred while establishing a connection to SQL Server. The server was not found or was not accessible

Based on my research, I though when using docker compose between docker images you can reference ms-sql-server instead of local host. also when executing the last command how do I append multiple arguments? it seems --WithSeedOnce is not considered and argument for the app

So, from what I gather, there are two things that jump off the page: