I am working with some COM libraries which allow me to connect to the IBM PCOMM API. I am trying to obtain a list of connections, from an object called AutConnList(). The code looks like this:

I compile the code to both .NET Framework (4.6) and .NET Core (3.0) as it is intended as a library used by many different programs. The multi-compiling is done by adding the following line to the .csproj file:

The method works as intended, when consumed from .NET Framework applications, but when I try to consume it from .NET Core, I get the following exception:

I have tried solutions from different posts about similar issues (like this), but without luck. Also, I haven't found any other posts, where the problem only occurs in a specific framework.

I dont know if it has anything to do with the differences in referenced assemblies, but the error code doesn't really suggest that? 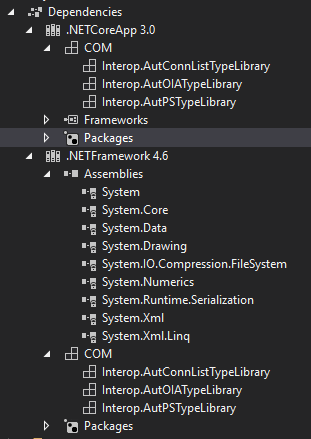 Have anyone encountered similar issues, and if so, how did you solve it?