I have an NUnit test project which works fine on its own until I start trying to bring Xamarin into the mix. Here is what my test looks like just to start:

This compiles fine, but when I run it, I get an error from the first line:

I have verified that this reference java.interop is included in the project and also confirmed that the .dll is in the location on the drive that the reference is pointing to: 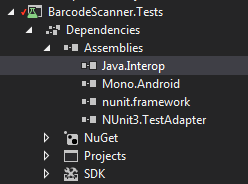 Is it just not possible to create instances of Xamarin objects in the NUnit test project?

I've seen this brought up numerous times from my research but the conclusion is usually along the lines of "Not sure if its possible, just avoid referencing Xamarin" Does anyone know for sure?