"Path not found" when running a script as scheduled task

I have a VBScript script which, when I run manually, runs perfectly, but when I run it as a scheduled task the error from Err.Description is "Path not found".

(Note: The sample below is a subset/modified version of the actual script, for ease of reading in this question)

Edit: I replaced fs.CopyFile with a call to robocopy using shell.Run. When I run manually it works. When I run from the scheduled task it shows "ERROR 1326 (0x0000052E) Accessing Destination Directory \\172.17.201.12\Backups\Copied from Primary DB Server\ Logon failure: unknown user name or bad password." so I guess the scheduled task isn't using the stored credentials of this shared folder on the other server. So is there a way to get it to use stored credentials? Or do I have to set that folder to full control for 'Everyone'? 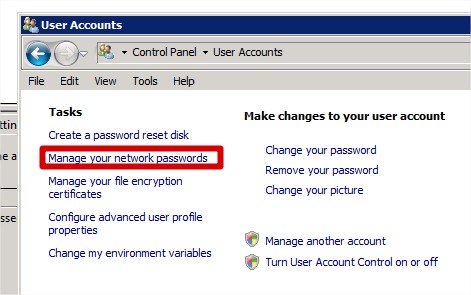 With appropriate user account on the target server added the script now runs successfully from the scheduled task.

(Note: These servers are not members of a domain)