Could not load file or assembly or one of its dependencies

I'm having another of these "Could not load file or assembly or one of its dependencies" problems.

Additional information: Could not load file or assembly 'Microsoft.Practices.Unity, Version=1.2.0.0, Culture=neutral, PublicKeyToken=31bf3856ad364e35' or one of its dependencies. The located assembly's manifest definition does not match the assembly reference. (Exception from HRESULT: 0x80131040)

I have no idea what is causing this or how I could debug it to find the cause.

I've done a search in my solution catalogs .csproj files, and every where I have Unity I have:

Can't find any reference anywhere which goes against 1.2.0.0 in any of my projects.

Any ideas how I should go about solving this?

I would also appreciate tips on how to debug problems like this in general.

You can use FusLogVw to find out who is loading the old assemblies, just define a path for the log, and run your solution, then check (in FusLogvw) the first line where the Unity assembly is loaded, double click it and see the calling assembly, and here you go.

then select the pool you are using

go to advanced settings (at right side)

Change the flag of Enable 32-bit application false to true.

For me, none of the other solutions worked (including the clean/rebuild strategy). I found another workaround solution which is to close and re-open Visual Studio.

I guess this forces Visual Studio to re-load the solution and all the projects, rechecking the dependencies in the process.

Try to clean Debug and Release folders in your solution. Then remove and add unity again.

At 99% the Could not load file or assembly or one of its dependencies problem is caused by dependencies! I suggest you follow this steps:

Microsoft Enterprise Library (referenced by .NetTiers) was our problem, which was in turn referencing an older version of Unity. In order to solve the problem we used the following binding redirection in the web.config:

Alternatively, you may want to just update the Enterprise Library to the latest version.

Following worked for me.

Check the Web.config/App.config file in your project. See if the version numbers are correct.

This worked for me.

Despite the original question being posted five years ago, the problem still persists and is rather annoying.

The general solution is thorough analysis of all referenced assemblies to understand what's going wrong. To make this task easier I made a tool (a Visual Studio extension) which allows selecting a .NET assembly (a .dll or .exe file) to get a graph of all the referenced assemblies while highlighting conflicting or missing references. 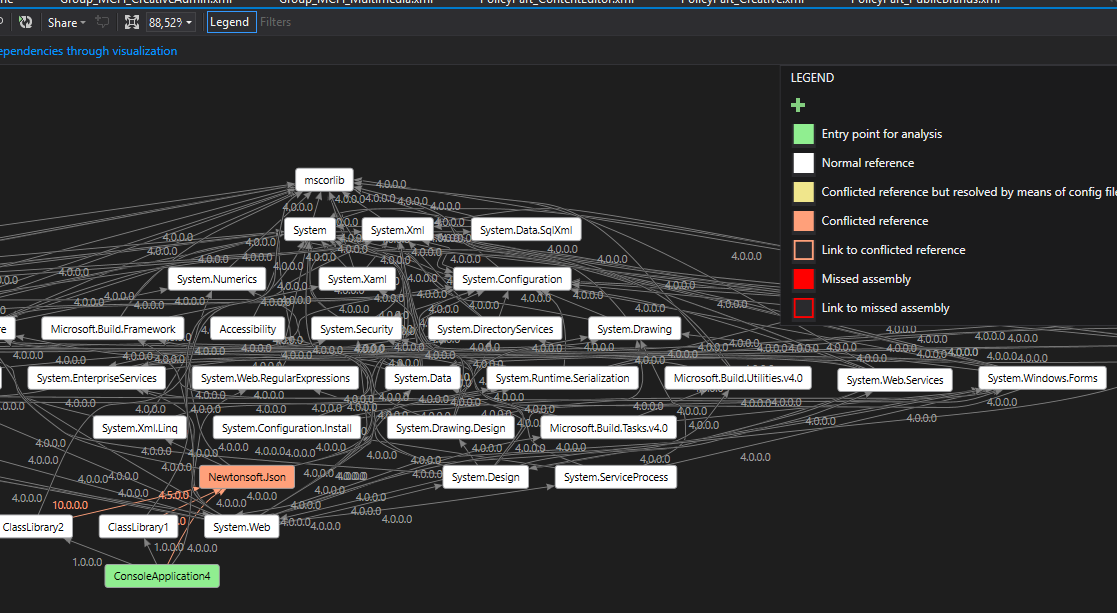 Juntos answer is correct but you should also consider:

For the unity v2.1.505.2 different AssemblyVersion and AssemblyFileVersion attributes are specified: 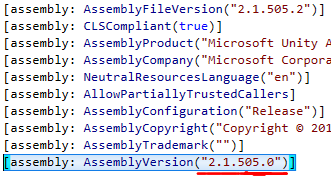 AssemblyFileVersion is used by the NuGet but CLR does not care about it! CLR is going to use only AssemblyVersion!

So your redirects should be applied to a version that specified in AssemblyVersion attribute. So 2.1.505.0 should be used

I also got this terrible error and found a solution for this... 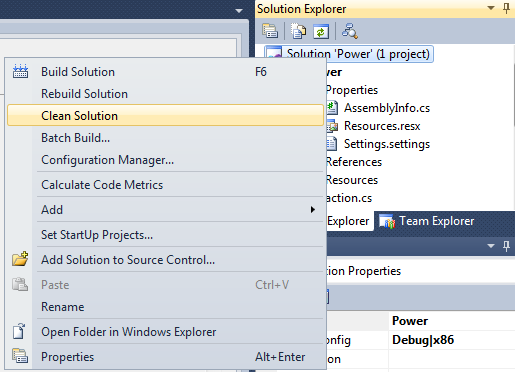 Hope this will help you also.

Check that the Assembly name and the Default namespace in the Properies in your asemblies match. This resolved my issue which yielded the same error.

In my case in the bin folder was a non reference dll called Unity.MVC3 , i tried to search any reference to this in visual studio without success, so my solution was so easy as delete that dll from the bin folder.

Thanks Riddhi M. Following worked for me.

You say you have a lot of projects in your solution ... well, start with one near the top of the build order. Get that one to build and once you figure it out you can apply the same fix to the rest of them.

Honestly, you probably just need to refresh your reference. It sounds like you either updated your version and didn't update the references, or it's a relative path issue if you keep your solution in source control. Just verify your assumptions, and re-add the reference.

Following worked for me.

This issue happened to me where one of my dependent libraries was compiling a DLL with "Any CPU" when the parent library was expecting a compilation of "x64".

I had the same problem i solved it via the instructions below: 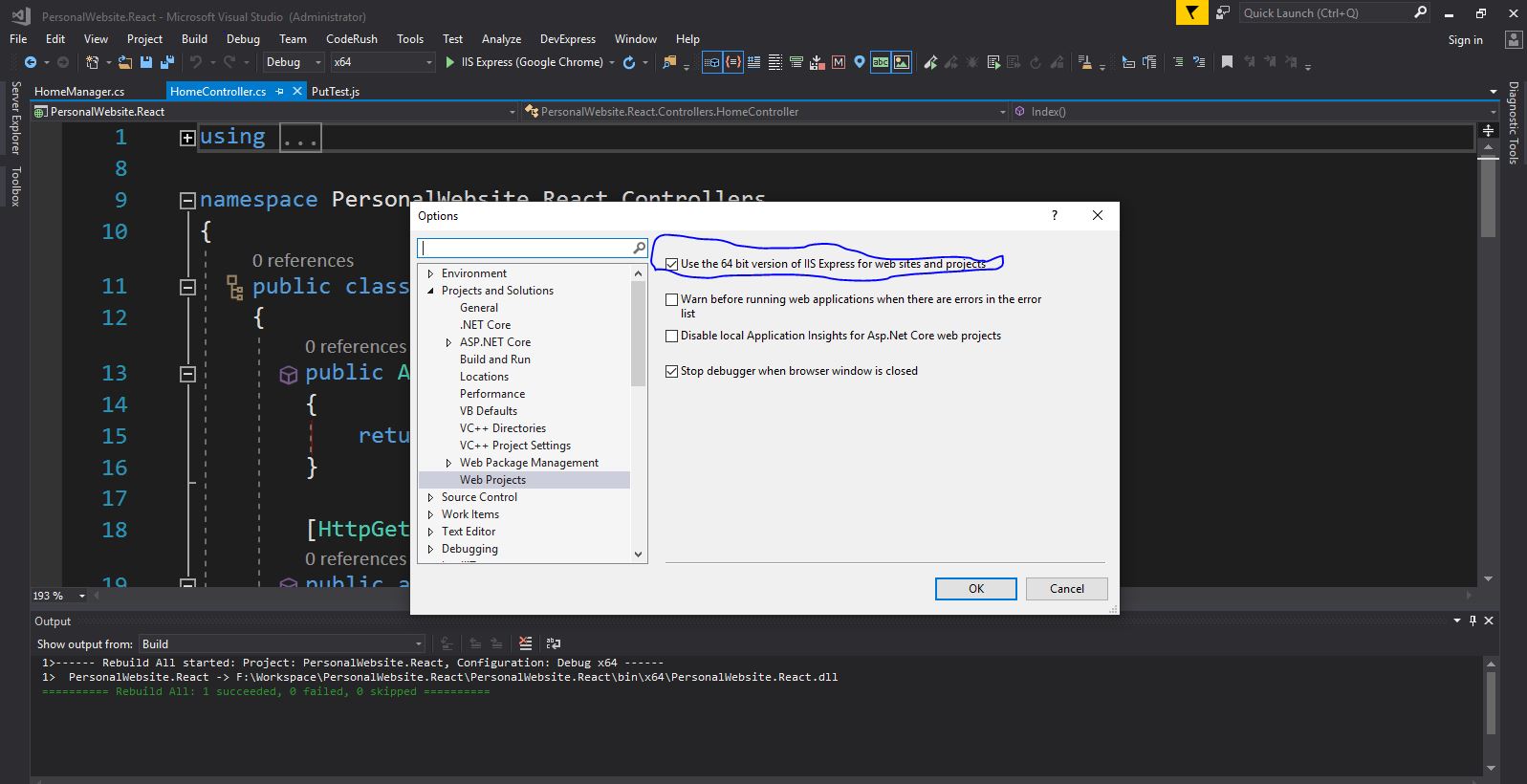 You have to delete Your appname.dll file from your output folder. Cleanup Debug and Release folders. Rebuild and copy to output folder regenerated dll file.

I think it couldn't found the .dll because it was not in the assembly at first.

if this not work please dont abuse me . i am also a junior

Another possible cause: make sure you haven't accidentally given both of the projects the same assembly name in project properties.

My solution for .NET 4.0, using Enterprise Library 5, was to add a reference to:

For me rebuilding the unity game without Unity C# Proects Checkmark worked.

In my case, none of the proposed answer worked.

Here is what worked for me:

The second step was important apparently as it did not work without it.

Try checking if the "Copy to Local" property for the reference is set to true and the specific version is set to true. This is relevant for applications in Visual Studio.

I had this today, and in my case the issue was very odd:

Note the stray characters at the end of the XML - somehow those had been moved from the version number to the end of this block of XML!

Changed to the above and voila! Everything worked again.

Okay this may sound very stupid, but heres how I solved the issue after trying out every other solution and spending a night on this stupid thing.

I was getting the same error with some DLL missing from Bin Folder. I tried to delete , get back up everything from Team Foundation Server but didn't work. Got a copy of Bin folder from my office-matelocal machine, and replaced it. It didn't work either. At last, I manually FTPed server, got the copy of DLL which was showing up as missing, and then it started showing up that next file in the file list sequence is missing.

So I ftped server Got all Bin Folder, Manually replaced each file one by one. (Not Ctrl + All and replace.. I tried : it didn't work.) And somehow it worked...

I have a three-tier application and I forgot to copy the DLL also to the right path at IIS. Just after copied it to the right place it worked for me.

Here increment the Assembly and Assembly file version and rebuild.

If that does not work,

1 - Open the solution in file Explorer.

3 - Remove all bin and obj folders.

4 - Reopen the project and build it.

I had this problem, the mistake was actually very silly. I had specified the wrong location for the .dll file, after changing the location to correct location the loading happened correctly (answering so someone else don't make this mistake).

For me, it seems that Nuget wasn't playing nice with my project/solution. I used Nuget to install NewtonSoft.Json The project file seemed to reference it correctly, and when I R-clicked the dll name in Solution Explorer/Dependencies/Nuget, then clicked Properties, I found that the dll existed where properties said it should be.

I deleted the Nuget package and did R-click Project > Add > Reference and browsed to the dll in a packages directory when a former Nuget process had installed it, and then the Solution ran fine.

NOTES: this solution is quite a a hodge podge, starting with a Xamarin.iOS solution and adding a .netstandard project (which is where I had difficulty using Nuget). There is also a "portable" project in the solution. I inherited all this from a dev who has been gone for 3 years. Ha ha.

I have a C# Winforms project called SetTags with a large number of forms that I use Visual Studio 2013 to work on. After editing one of them and trying to build I got the error:

The error also appeared when I tried to save the project or to close the form I had been working on.

I fixed the problem by removing a recently added radio button control and commenting out all references to it, then added the control again and uncommenting the code. This allowed me to save the form, and on closing restarting VS the problem had disappeared.

My Visual Studio environment has many occasional problems - Toolbox not showing or appearing only on VS startup, unrecognized custom controls when trying to view a form in Design mode - and it may be that I need to move on to a later VS version.

A strange fix for me, but I had just pulled this solution from source control.

Will only apply to a few, but I guess I was one of the few so there will be more. Not sure what happened the first time, but somehow some assemblies must have had some issues when I pulled them across.

Essentially turn it off and on again.

I wasted a few frustrating hours on this problem too. We had to update our version of the .NET Framework, and started getting multiple “Could not load file or assembly or one of its dependencies” for several DLLs that had not been changed for years. Strangely, the versions being searched for in the error messages were all extremely old. For example, it was searching for Newtonsoft.Json version 6.0.0 while we had been using 8.0.1 for years.

Reverting to these ancient versions was not an option, and anyway there were a bunch of bindingRedirect elements in our web.config file that were supposed to redirect calls to old DLLs to the new ones. Rolling back the .NET version made the errors go away, but we needed the new version. What is going on?

The <runtime> element in our web.config file contained the element:

The dependentAssembly elements that seemed to be ignored were contained in that.

The culprit was the appliesTo attribute. It meant the bindingRedirect applies only to .NET version 2.0.50727. When we updated the .NET Framework version, all our bindingRedirect elements were ignored.

The solution in our case was to remove the appliesTo attribute entirely.

Your project's csproj file must contain a package reference of Microsoft.Practices.Unity and this could not be found in the global-packages folder (%userprofile%.nuget\packages), running dotnet restore fixes the issue