When I'm trying to create a new project via File > New > Project... in Visual Studio 2017, I'm receiving the following error message and the project is not created:

Don't mind the german message text in the screenshot:

If I try to create a project via the quick search box on the starting page of visual studio, VS just crashes instantly with no exception message at all: 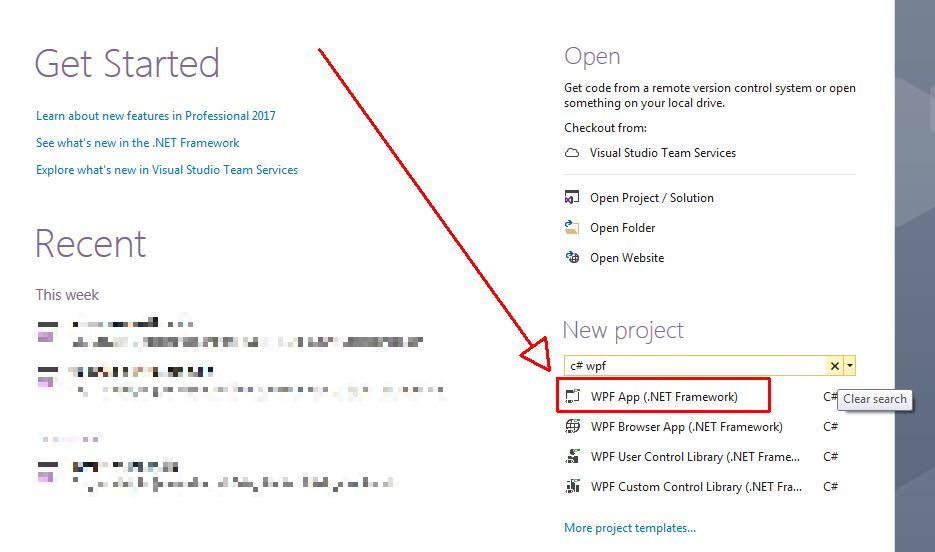 Has anybody else ran into this issue and might know how to fix it?

I had the same error. I solved it by following the procedure :

all credit for this should go to https://developercommunity.visualstudio.com/content/problem/31188/access-denied-error-1.html

Ok, I fixed it. Long story short, the reason for the problem was an incomplete and/or corrupted setup.

But it was a rather bumpy road to the solution, including several un-installations and re-installations until I eventually figured out why the setup was indeed faulty.

Sometimes I got an exception during the installation, other times it finished just fine, but the HRESULT-error persisted when I tried to create a new project.

I my special case, this was caused by the corporate firewall, that blocked some of the setup packets from being downloaded by the web installer. I solved the issue by connecting to an open WiFi, that's not filtered by the firewall.

As I'm working with a standard user, UAC kicks in when I start any installation routine. When I first started the setup via UAC and connected to the free WiFi, it wasn't able to find the packet servers. It took me a minute to realize that the admin user I used for UAC had his own internet proxy settings, that wouldn't work with the open WiFi.

After I logged on as administrator, disabled the proxy and logged on as my main user again, I ran the setup again - and it failed again with a bunch of "incomplete workload" messages. As frustrated as I was at this point, I simply ran it again via the "Change" button without even closing the webinstaller and this time it finally completed without any errors!

After this, I could start VS just normally and creation of a new project was possible.

So, if you experiencing any troubles like this, I would strongly recommend to run a "Repair" or "Change" installation just over your existing one but try to avoid any firewalls between you and the internet.

This 's about IIS Express in your computer . you only need to repair it in control panel is ok .

I tried and success.

I had the same error when I tried to create a test certificate. I have just launched VS as administrator. And everything is Ok

The below solution worked for me

I tried changing the version of .Net Framework from 4.0 to 3.5 while creating the project. This solved my error. enter image description here