I just updated my server (Windows 2012R2) to .Net Core 1.0 RTM Windows Hosting pack from the previous .Net Core 1.0 RC2. My app works on my PC without any issues but the server keeps showing:

It previously worked with the RC2 version. Don't know what could go wrong.

This is all event viewer says:

the worst part is that app logs are empty! I mean those stdout_xxxxxxxxx.log files are completely empty and all have 0 byte size.

What should I do?? How can I know the cause of error when it's not logged??

I was able to fix it by running

on the command prompt, which gave me a much more meaningful error:

I had the same problem, in my case it was insufficient permission of the user identity of my Application Pool, on Publishing to IIS page of asp.net doc, there is a couple of reason listed for this error:

In my case it was the fourth reason, I changed it by right clicking my app pool, and in advanced setting under Process Model, I set the Identity to a user with enough permission:

I got this working with a hard reset of IIS (I had only just installed the hosting package).

Turns out that just pressing 'Restart' in IIS Manager isn't enough. I just had to open a command prompt and type 'iisreset'

I can't say for sure what the problem was with the old server but I have one idea.

So because I previously compiled the app without any platform in mind it gave me the dll version which only works if the target host has .Net Core Windows Hosting package installed. In my case it was installed and that was fine.

After the app didn't work I decieded to compile it as a console app with win7-x64 as runtime. This time the moment I ran the exe of my app on the server, it crashed with an error about a missing dll:

That dll is from Universal C Runtime that's included in the Visual C++ Redistributable for Visual Studio 2015.

But when I tried to install them in the new server, Windows Server 2008 R2, they successfully installed. That might have been the reason behind it, but still can't say for sure.

I had the same issue when publishing the web app. If anybody still has this problem fixed it by changing {AppName}.runtimeconfig.json

I had the same problem.

To find out the exact source of it I switched on logging in web.config file:

After restarting IIS and trying to execute API I got an error and it was missing of proper Core Runtime. After downloading an installing DotNetCore.1.0.5_1.1.2-WindowsHosting the error gone.

Had the same issue and all solutions didn't work. Found this gem and thought I'd pass along if it helps someone else. Install on Server 2012 R2 getting the DLL missing error, try to reinstall VS C++ 2015 and get an error. Fix is to do the following:

I got this issue on my production server after my VS project was automatically upgraded to .NET Core 1.1.2.

I simply installed the 1.1.2 .net core runtime from here on my production server: https://www.microsoft.com/net/download/core#/runtime

SOLVED I just ran through the same issue today while deploying to AZURE. Then I tried the same for local IIS, got the same issue. As I am new to .net CORE, struggled few hour before I actually solved it.

And This SOLVED my problem, Hope it help.

I had the same problem when I updated my dev machine to Core 1.0.1, but forgot to update the server.

I had a similar issue, and to quote Sherlock Holmes: "when you have eliminated the impossible, whatever remains, however improbable, must be the truth?"

I checked if the .NET framework I was targeting was installed on the server, and it turns out it wasn't. I installed the 4.6.2 .NET Framework and it worked.

I was getting HTTP Error 502.5 while trying to publish my .NET Core 2.0 API to AWS EB, and solved it by adding the following code to the .csproj:

I had a same issue . I changed application pool identity to network service account . Then I explicitly set the path to dotnet.exe in the web.config for the application to work properly as @danielyewright said in his github comment . It works after set the path.

Sharing that in my case this error was because i forgot to update project.json with:

I had the same error in question, with the same issues as described by VSG24 in Proposed answer - nasty error message when typing 'dotnet' into CMD:

The program can't start because api-ms-win-crt-runtime-l1-1-0.dll is missing

I solved this by manually installing the following 2 updates on Windows Server 2012 R2 (and the pre-requisites and all the other updates linked - read the installation instructions carefully on the Microsoft website):

Hope this helps someone.

I faced the same issue when I tried to publish Debug version of my web application. This set of files didn't contain the file web.config with the proper value of attribute processPath.

I took this file from Release version, value was assigned to the path to my exe file.

In my case was problem with Net Core version installed on server. I just install the same version as on my development machine and everything is OK :-)

In my case, after installing AspNetCore.2.0.6.RuntimePackageStore_x64.exe and DotNetCore.2.0.6-WindowsHosting.exe , I need to restart server to make it worked without 502 bad gateway and proxy error.

I needed to install the latest .net Core version found here. No need to restart the site or server

I solved it by adding "edit permission" to the application of the site, mapped to the physical directory and then selected the windows user that could have access to this root folder. (private network).

For me it was caused by having different versions of .Net Core installed. I matched my dev and production server and it worked.

I had this problem aswell (The error occurred both on VS 15 and 17). However on VS15 it returned a CONNECTION_REFUSED error and on VS17 it returned ASP.NET Core 1.0 on IIS error 502.5.

Here is what I figured, and this happened recently on Windows 10 after an update was installed. From what I gathered, a Windows Defender update was installed which assumed my "Project.dll"(an asp.net core project) behaved like a virus so it was deleted.

So, one of the first things I suggest you do before you start installing/uninstalling stuffs is to check to confirm your "Project.dll" is where it should be.

Copy it back to the location if it is no longer there.

If you are having difficulty copying the file back add an exclusion to your project folder in windows defender. ( Learn how to do that here. )

This worked for me instantly, and I repeated it across application multiple servers.

For me it was that the connectionString in Startup.cs was null in:

and it was null because the application was not looking into appsettings.json for the connection string.

Had to change Program.cs to:

I have no idea why this worked for me, but I am using Windows Authentication and I had this bit of code on my BuildWebHost in Program.cs:

After removing the .UserHttpSys bit, it now works, and I can still authenticate as a domain user.

I was getting the same error, and found out the problem was that during the publish to Azure, my web.config file was modified so this following line ended up like this:

The problem for Production are the contents of the arguments: "-argFile IISExeLauncherArgs.txt"

It seems like this issue is going to be addressed in the next .NET Core SDK (currently in preview), but for now, the workaround is to add this block to the .csproj file:

This will modify the web.config and remove the problematic part for publishing.

Worked for me after changing the publishing configuration. 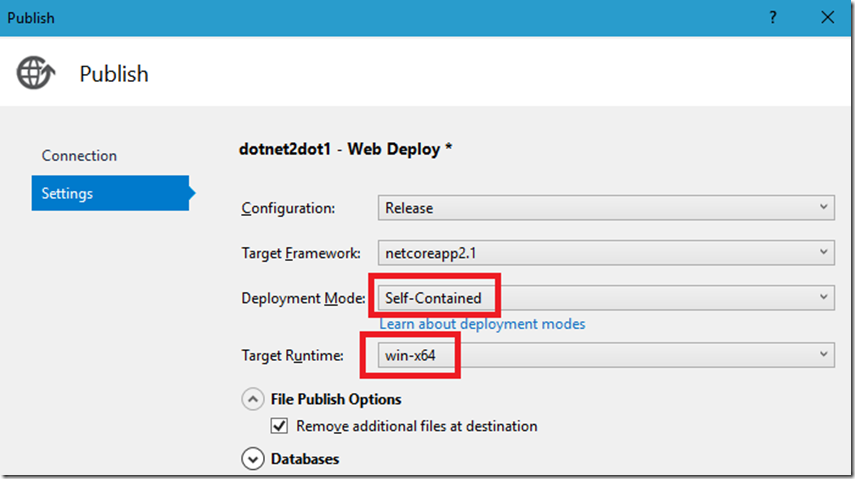 I had a similar issue (Asp.Net Core 2.x) that was caused by trying to run a 32-bit asp.net core app in IIS on a 64-bit windows server. The root cause was that the web.config that is auto-generated (if your project does not explicitly include one, which asp.net core projects do not by default) does not contain the full path to the dotnet executable. When you install the hosting bundle on a 64 bit machine it will install the 64 and 32 bit versions of dotnet, but the path will resolve by default to 64 bit and your 32 bit asp.net core app will fail to load. In your browser you may see a 502.5 error and if you look the server event log you might see error code 0x80004005. If you try to run dotnet.exe from a command prompt to load your asp.net core application dll on that server you may see an error like "BadImageFormatException" or "attempt was made to load a program with an incorrect format". The fix that worked for me was to add a web.config to my project (and deployment) and in that web.config set the full path to the 32-bit version of dotnet.exe.

I then uncommitted them like below and the problem solved:

I changed profile options to this and it's working!!! 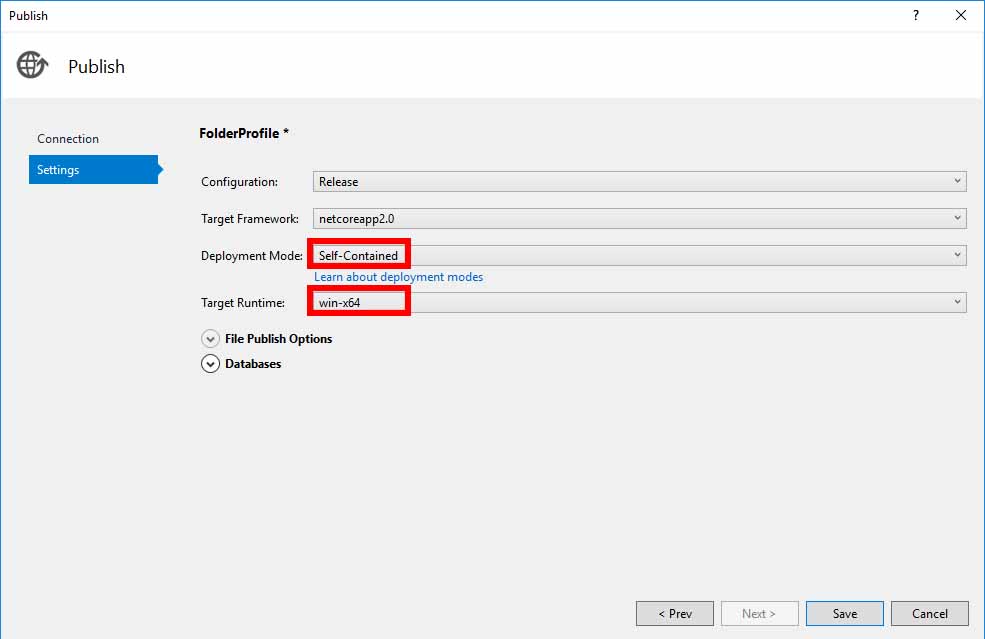 Maybe you should change this two options: