So I'm trying to figure out what's going on and I tried with Dependency Walker, but the only errors I see when I open my exe with it are those files missing:

I doubt that's the problem though, those errors seem to show to a lot of people and I guess I should ignore them

The rest of the dlls seem to be ok and 32 bit, so that would appear to be fine

I tried to find out something more using the profiling option on dependency walker but it hangs after loading a bunch of dlls, I doubt any information from the profiling log is helpful but i post it anyway (i can't copy it from the Dependency Walker window cause the process is not responding at this point) 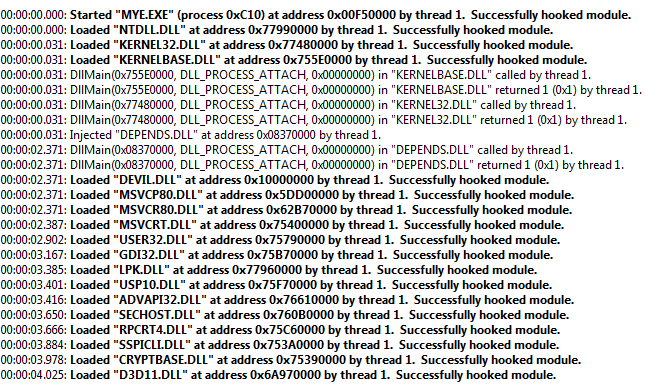 I've read in another stack overflow post that this problem might be fixed in a 2.2.8288 version of Dependency Walker that I was not able to find

At the moment I have no idea how to figure out why is it happening, any tip would be helpful

I tried the latest Dependency Walker version installing it from WDK as suggested, but it suffered the same issue

I'm trying with Process Monitor too and I have a list of the dlls loaded. I checked the list with a script that runs dumpbin on the file to check the architecture just to be sure, this is the result, it seems ok to me, the only x64 dlls are wow64 dlls, that should be fine, am i overlooking something?

This is an old question I know, but because I experienced same error this week and have spend a lot of time to find the cause (repair, reinstall Visual Studio, recompile dependent DLLs,...), I share my solution here.

The 0xc000007b error sometimes occurred due to a DLL conflict. One of imported DLLs is imported from other location than you expected. For example in your question there is a second copy of GPSVC.DLL on your path that is loaded and made the 0xc000007b error.

You can find the DLL location with where console command and see if a second copy exists or not: