I'm calling functions from a 32-bit unmanaged DLL on a 64-bit system. What I get is:

BadImageFormatException: An attempt was made to load a program with an incorrect format. (Exception from HRESULT: 0x8007000B)

At first, I had my projects set to the Any CPU platform, so I changed them both to x86, but this error is still occurring. That's really the only fix I know for this.

The DLLs aren't corrupt or anything, because I can use them with other programs (that I don't have the source to). I thought that perhaps it wasn't finding a dependency, but I checked and they're all there. Plus, wouldn't it throw a DllNotFoundException in that case?

What else can I do? And before you say "Use a 64-bit unmanaged DLL instead," let me point out that there isn't one. ;)

If you try to run 32-bit applications on IIS 7 (and/or 64-bit OS machine), you will get the same error. So, from the IIS 7, right click on the applications' application pool and go to "advanced settings" and change "Enable 32-Bit Applications" to "TRUE".

Somehow, the Build checkbox in the Configuration Manager had been unchecked for my executable, so it was still running with the old Any CPU build. After I fixed that, Visual Studio complained that it couldn't debug the assembly, but that was fixed with a restart.

I hope this helps someone! :)

I just had this problem also. Tried all the suggestions here, but they didn't help.

I found another thing to check that fixed it for me. In Visual Studio, right-click on the project and open "Properties". Click on the "Compile" (or "Build") tab and then click on "Advanced Compile Options" at the bottom.

Go to: Tools > Options > Projects and Solutions > Web Projects > Use the 64 bit version of IIS Express

If you are using Any CPU, you might encounter this issue if the Prefer 32-bit option is checked:

Make sure you uncheck this option in the project's property's Build tab! 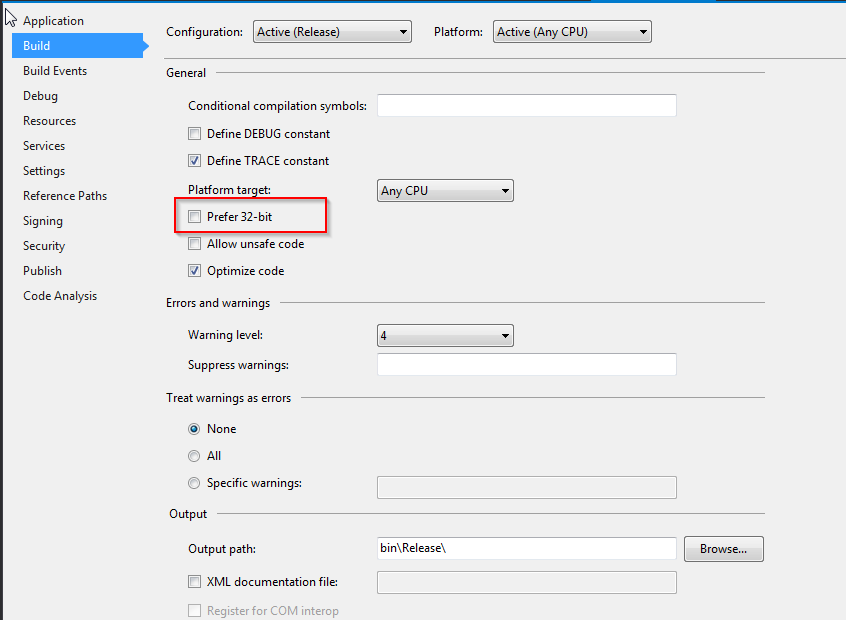 A bit off topic for this post, but searching for this error message brought me here.

If you are building through team system and getting this error, the build definition process tab has a "MSBuild Platform" setting. If this is set to "Auto", you may experience this problem. Changing it to "X86" can also resolve the error.

In my case I was using a native DLL in C#. This DLL depended on couple of other DLLs that were missing. Once those other DLLs were added everything worked.

Building on the answer of @paibamboo

He said: Go to: Tools > Options > Projects and Solutions > Web Projects > Use the 64 bit version of IIS Express

My coworker had this box checked (he explicitly looked for it), but had the error message in question. After some hours he unchecked the box and checked it again. Lo and behold: The code now ran with success.

It seems, that there are two places where the state of this box ist saved which became out of sync. Un- and rechecking it synced it again.

Question for more knowledgable users: Was there an update or something last week (for VS 2015) which de-synced the states?

Also see this answer, which solved the same problem for me.

Posted by Luis Mack on 5/12/2010 at 8:50 AM I've found the same problem, only for a specific project when compiling on a 64-bit machine. A fix that SEEMS to work is to manually alter one character in the image stream EVERY TIME the usercontrol or form is edited in the designer

In my case, I am using a tiny .exe that reloads the referenced DLLs via Reflection. So I just do these steps which saves my day:

In my case, I was running tests through MSTest and found out that I was deploying both a 32-bit and 64-bit DLL to the test directory. The program was favoring the 64-bit DLL and causing it to fail.

TL;DR Make sure you only deploy 32-bit DLLs to tests.

I got this issue solved in the 'Windows' way. After checking all my settings, cleaning the solution and rebuilding it, I simply close the solution and reopened it. Then it worked, so VS probably didn't get rid of some stuff during cleaning. When logical solutions don't work, I usually turn to illogical (or seemingly illogical) ones. Windows doesn't let me down. :)

I was able to fix this issue by matching my build version to the .NET version on the server.

I double clicked the .exe just to see what would happen and it told me to install 4.5....

So I downgraded to 4.0 and it worked!

So make sure your versions match. It ran on my dev box fine, but server had older .NET version.

In my case it was wrong content of the file. DLL was downloaded from the web, but content of the DLL was HTML page :D Try to check if it is binary file, if it seems like correct DLL :)

We were having the same issue in .NET core. The solution was to download 32-bit .netcore runtime, and having your project target x86

In your csproj file add

This was used for a Windows machine, you'd have to adjust paths and such for Linux/OSX

We had a similar issue and we managed to fix it by setting the Platform target to x86.

If you are importing unmanaged DLL then use

in your DLL import method.