I am trying to do the following deployment with SCCM 2012 R2:

The TS is working, showing up in Softwarecenter as installed successfully. Except that two of the applications don't get installed during OSD - Google Chrome and Adobe InDesign.

During Task Sequence Step "Installing Application", it shows that there are 8 applications to install. But those two seem just to be skipped - there are no errors in smsts.log or appenforce.log. In the last one i can only find the apps that get installed, there is no information about Chrome or InDesign.

Any ideas where i can look or where the problem could be?

Tested again on a VM: i installed both apps during OSD in a TS for installing Domain Clients. Both apps were there directly after OSD. Then i installed the Workgroup TS on the same machine. Chrome and InDesign are missing. AppEnforce.log does not show a sign of them... just like they did not exist...

Now i know why there is nothing in the logs: i enabled the checkbox "If an application installation fails, continue installling other applications in the list". I was expecting that erros during application deployment would still be loged - this is not the case.

Now i disabled this checkbox, and i see errors for Chrome and InDesign: Error 0x80004005, in combination with Execution Status 24 (Application download failed). I still don't see the problem, since the same applications can be installed with other Task Sequences or after OSD with the CMClient. Both times no errors...

EDIT3: I can't explain why, but after i did what Omnomnomnom recommendet, Chrome is installing during OSD. InDesing is not. I now even completely deleted the application in SCCM and recreated it. Did not change anything... I think i have to go to Microsoft Support...

With the help of our Microsoft Support Center, if finaly found a way to install all the applications during OSD: I had to put Adobe InDesign and Adobe Illustrator in their own TS Step, with reboots in between. After that, all apps are deployed during osd.

This seems more like a workaround than a solution - but it works, so i will stick with that.

Do you use some Kind of End-Point-Protection or Data Loss Prevention System? I encountered this problem, when system blocked the copying of certain file types.

Does the installation work on OSD's where the pc is joined to the domain? If so, what I was thinking was, since you're getting 0x80004005 access denied. you may have to allow anonymous connections to your distribution point. I guess Workgroup clients would not know how to authenticate to the DP. 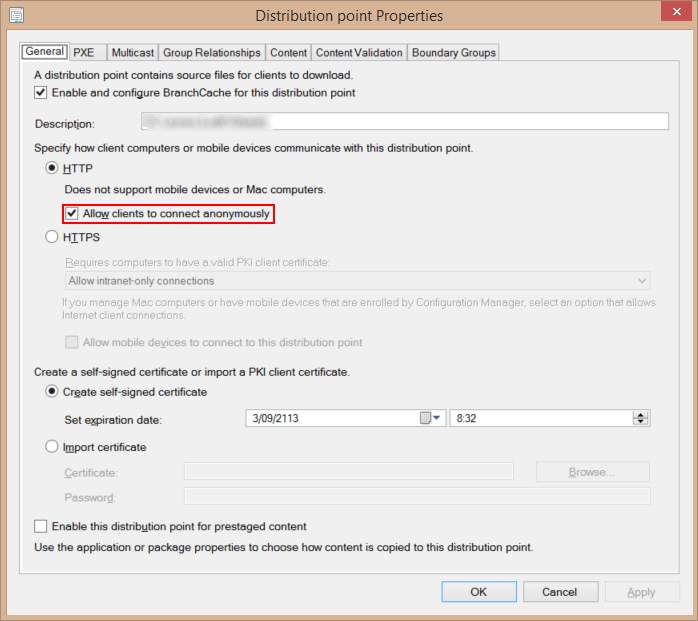